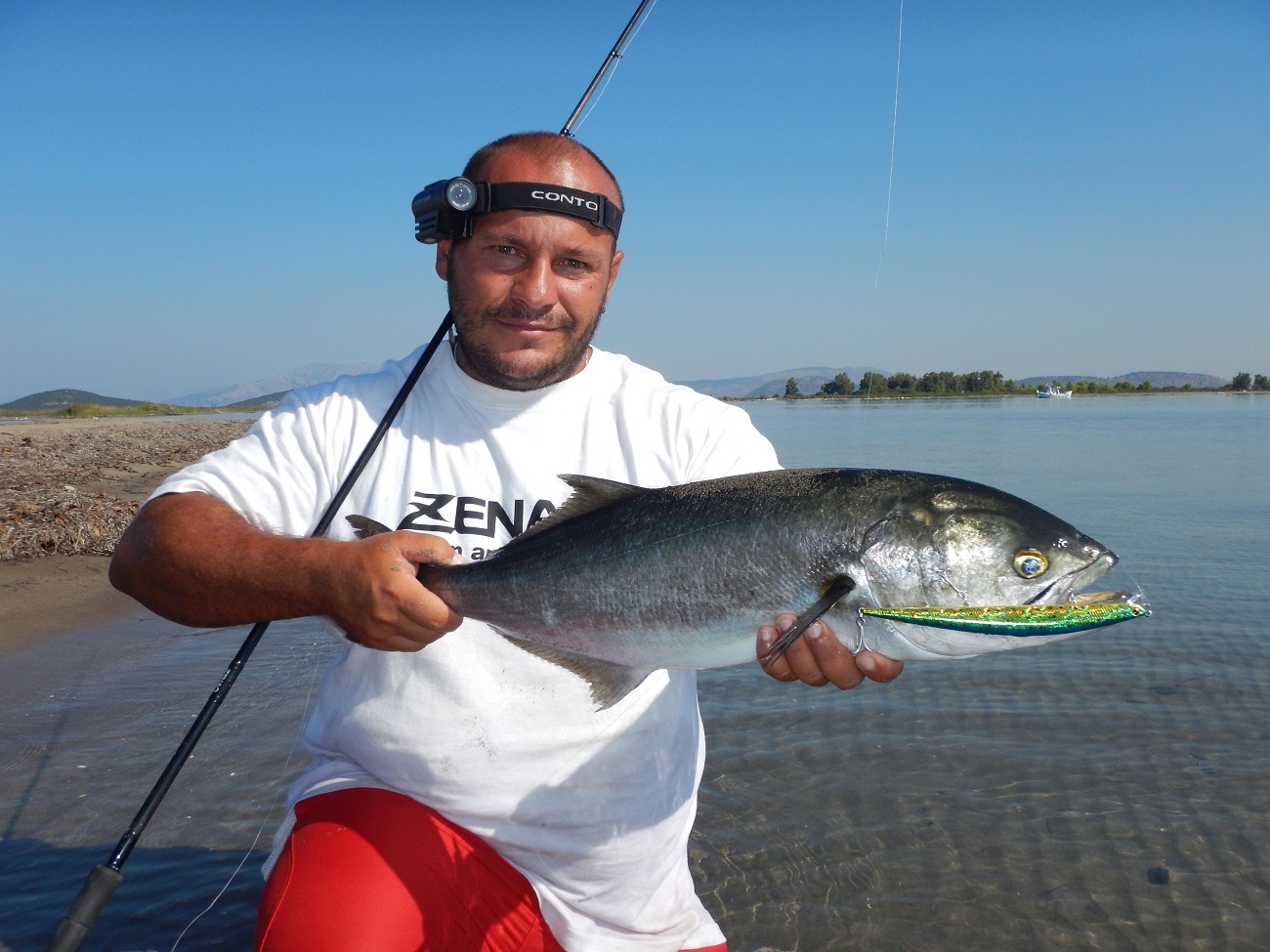 In this article we will not talk about technical details, but for an artificial lure category that seems to work excellent for the most of us. I’m referring to minnows 17.5 to 20cm which apart from fishing, can be used as defensive weapons! I remember during my first steps in lure fishing, my main options on artificial minnows rarely exceeded 14 cm. Back then, big minnows were only Rapalas magnum that was supposed to capture big fish with trolling and actual large minnows for spinning was not available in my country.  Having this idea in my head, it took me too long to overcome my doubts and order from the internet a really large minnow. My first big lures soon become reality and were under the names DUO Tide Minnow Slim 175 and 200. My mind influenced by the aggressiveness of predators like bluefish and barracudas and hoped my new lures to do the job. And they did. The unexpected fact was that even if I was targeting voracious aggressive “toothy” fish, I manage to get sea bass more than often. But let’s see things as they really are.

The long minnow during the seasons

Some are thicker while other slimmer, others have three trebles and other two, but all are in a size that even if you put them inside your both palms, some part is going to left over from the outside! These peculiar lures that look like they made for Godzilla fishing, often manage to capture fish at the same length or smaller than their selves. The natural flow of things has taught us that the big fish eats the small. But in the sea, exceptions are a routine and sometimes small fish also attack larger ones. In my country the summer months that baitfish are very small, predators adjust their hunting techniques for it and completely ignore anything bigger as pray. In fact they often do our spinning life hard and the only way to land a fish is by using a smaller silicon lure. The sizes of lures that fish normally ignore are the 10 to 15 range. But larger ones do sometimes become effective. Why? When predators attack a school of fish, they use strategies to circulate it or guide it against the surface. Our fish in this situation is the intruder that came out of nowhere to take advantage of it. Our lure also in the eyes of the baitfish is just another attacker and panics them. So other predators attack it to move it away because it only creates trouble. This is why it is common during those months, the fish we will get, to be hooked from sides, skull etc. As our planet performs once again the eternal cycle, the seasons change, the waters get colder and the small baitfish are now less but large. Now several hungry predators are also present and will not hesitate to devour anything that swims in order to overwinter. And there is exactly the last part of the puzzle. The big lure. With its size it attracts attention and not goes unnoticed. Yet we should not forget that after February, which is the main breeding season for barracuda and bluefish, fish tending to become unexpectedly aggressive to intruders. This in turn leads to multiple catches with mainly male fish, which are quick to defend the mating area from intruders and on the try to expel the intruder, and end nailed to our trebles. The funny thing is that the bigger our lure is and more intense color has, the more effective it gets.

Many big fish like Barracudas, Bonitos and Bluefish, have sharp teeth that can cut our line easily. Large lures like the 175 – 200mm are relatively safe to use because 90% the fish will attack on the middle and will only bite the hard plastic. This will ensure that the fish will get hooked on at least 2 of our trebles and won’t be able to reach the line. But all three species sometimes do attack on the head, especially in slower retrieves so the10% of the risk is always present. Another nice aspect is that a 17.5 to 20cm body produces very loud noise and very strong pulse. I’m more than confident that many times this is enough to promote a strike even from fish that normally would never attack. Slim types of such lures imitate garfish, needlefish and Sayori, very common preys that are consumed by most predators.

You must also know

Generally such lures tend to have large weight and can be used only by stronger spinning rods. These lures usually weight around 30gr so the need for a rod that has 30gr inside its best lure capability is essential, like a 10-45gr rod. Strong rod is a “must” because lures like those due to large volume show increased resistance so we need extra power to remain on the rod for a better hook up.  Now, regarding the use, anyone can fit them in his own personal style, but he should also experiment with additional techniques, since they can be adequate productive depending on place and mood of the fish. So we may land a fish after retrieving slow, fast, or twitching! Last but not least is important to know that the major rule says “big bait – big fish”. The same goes with our situation where a big lure can provoke a very big fish that is completely out of our capabilities. Such fish are usually tunas that find a 175 or 200 range lure a delicacy!